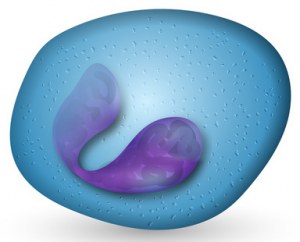 Eosinophil granulocytes, usually called eosinophils (or, less commonly, acidophils), are white blood cells that are one of the immune system components responsible for combating infection and parasites in vertebrates. Along with mast cells, they also control mechanisms associated with allergy and asthma. They are granulocytes that develop during Haematopoiesis in the bone marrow before migrating into blood.
These cells are eosinophilic or 'acid-loving': Normally transparent, they appear brick-red after staining with eosin, a dye, using the Romanowsky method. The staining is concentrated in small granules within the cellular cytoplasm, which contain many chemical mediators, such as histamine and proteins such as eosinophil peroxidase, ribonuclease (RNase), deoxyribonucleases, lipase, plasminogen, and major basic protein. These mediators are released by a process called degranulation following activation of the eosinophil, and are toxic to both parasite and host tissues.
In normal individuals, eosinophils make up about 1-6% of white blood cells, and are about 12-17 micrometers in size. They are found in the medulla and the junction between the cortex and medulla of the thymus, and, in the lower gastrointestinal tract, ovary, uterus, spleen, and lymph nodes, but not in the lung, skin, esophagus, or some other internal organs under normal conditions. The presence of eosinophils in these latter organs is associated with disease. Eosinophils persist in the circulation for 8-12 hours, and can survive in tissue for an additional 8-12 days in the absence of stimulation.
Development, migration and activation :
Eosinophils develop and mature in bone marrow.
They differentiate from myeloid precursor cells in response to the cytokines interleukin 3 (IL-3), interleukin 5 (IL-5), and granulocyte macrophage colony-stimulating factor (GM-CSF). Eosinophils produce and store many secondary granule proteins prior to their exit from the bone marrow. After maturation, eosinophils circulate in blood and migrate to inflammatory sites in tissues, or to sites of helminth infection in response to chemokines like CCL11 (eotaxin-1), CCL24 (eotaxin-2), CCL5 (RANTES), and certain leukotrienes like leukotriene B4 (LTB4). At these infectious sites, eosinophils are activated by Type 2 cytokines released from a specific subset of helper T cells (Th2); IL-5, GM-CSF, and IL-3 are important for eosinophil activation as well as maturation.
Functions :
Following activation, eosinophils effector functions include production of :
In addition, eosinophils play a role in fighting viral infections, which is evident from the abundance of RNAses they contain within their granules, and in fibrin removal during inflammation. Eosinophils along with basophils and mast cells, are important mediators of allergic responses and asthma pathogenesis and are associated with disease severity. They also fight helminth (worm) colonization and may be slightly elevated in the presence of certain parasites. Eosinophils are also involved in many other biological processes, including postpubertal mammary gland development, oestrus cycling, allograft rejection and neoplasia. They have also recently been implicated in antigen presentation to T cells.
Eosinophil granule proteins :
Following activation by an immune stimulus, eosinophils degranulate to release an array of cytotoxic granule cationic proteins that are capable of inducing tissue damage and dysfunction. These include:
Major basic protein, eosinophil peroxidase, and eosinophil cationic protein are toxic to many tissues. Eosinophil cationic protein and eosinophil-derived neurotoxin are ribonucleases with antiviral activity. Major basic protein induces mast cell and basophil degranulation, and is implicated in peripheral nerve remodelling. Eosinophil cationic protein creates toxic pores in the membranes of target cells allowing potential entry of other cytotoxic molecules to the cell, can inhibit proliferation of T cells, suppress antibody production by B cells, induce degranulation by mast cells, and stimulate fibroblast cells to secrete mucus and glycosaminoglycan. Eosinophil peroxidase forms reactive oxygen species and reactive nitrogen intermediates that promote oxidative stress in the target, causing cell death by apoptosis and necrosis.